The Ethics of Negotiations: Are There Any?

This event has been cancelled to ensure the safety of members. We apologize for the inconvenince. Stay tuned for further information on the 2020-2021 membership and event schedule. 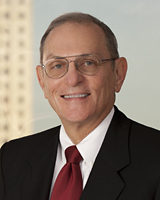 Mike Rubin, one of the leaders of the multi-state law firm of McGlinchey Stafford PLLC, with offices from the West Coast to the Gulf Coast to the East Coast, is a past president of the Bar Association of the United States Fifth Circuit Court of Appeals, the American College of Real Estate Lawyers, the Louisiana State Bar Association, and the Southern Conference of Bar Presidents. He is a member of the ABA's Standing Committee on Ethics and Professionalism, and has taught legal ethics in law schools. He also is a member of the American Law Institute and a Commissioner of the Uniform Law Commission.

A nationally-known public speaker and humorist who has given over 450 major presentations throughout the United States, Canada, and Great Britain, Rubin is an author of, co-author of, and contributing writer to more than a dozen legal books and over fifty articles for law review and periodicals. His works are used in law schools and have been cited as authoritative by state and federal courts, including the United States First and Fifth Circuit Courts of Appeals. Rubin’s latest legal book, on Louisiana real estate, constructions, and finance is THE LOUISIANA LAW OF SECURITY DEVICES, A PRECIS, now in its second edition. His debut novel, the historical-legal thriller, THE COTTONCREST CURSE, was published by the award-winning LSU Press and was named the IndieFab Book of the Year at the American Library Association's meeting as the best thriller and suspense novel published by the university and independent presses. His second novel, a contemporary legal thriller entitled CASHED Out, was released nationally by Cypress Rim Press and recently won the Jack Eadon Award for Best Contemporary Drama, which is bestowed upon one novel each year whose “characters are vividly portrayed as those individuals who can exist side-by-side with someone living in this world now, and “which deals with issues of today in dramatic fashion in a setting that is excruciatingly real.” The Providence Journal says CASHED OUT features “a lawyer down and out enough to make John Grisham proud. He’s culled from the likes of Michael Connelly by way of James Lee Burke. A gem of a tale."